Through the use of sophisticated algorithms, the microprocessor allows the VBx-1 to offer such unheard of features as deadband control, delayed start, soft start, delayed restart, short circuit protection and over power protection, all with astounding accuracy. The deadband control, delayed start and soft start features in particular greatly reduce the stresses on the transformer and rectifier extending their lives.

Not only does the VBx-1 protect itself, but it also protects expensive parts in the radio like the transformer, rectifier and filters. Unlike simple “dumb” electronic vibrators that will burn a transformer up if something as simple as the buffer capacitor shorts, the VBx-1 immediately senses this condition protecting itself and the transformer until the buffer capacitor can be replaced! No longer can a careless user destroy expensive parts in their radio simply by leaving it turned on after a failure.

As with all Aurora Design products, the VBx-1 is designed to SAE specifications and built in the USA at an ISO9001:2000 facility. 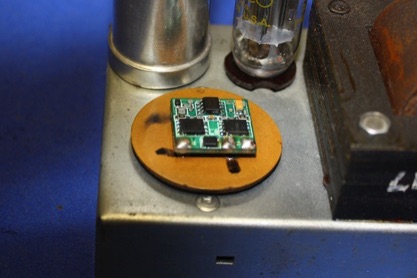 VBN-1 mounted to original base 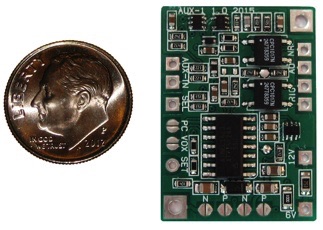 The AUX-1 is a microprocessor powered Auxiliary Input controller that simplifies adding an audio input to original radios. It has three triggers that can be used independently or in any combination to switch the radio over from normal operation to the auxiliary input. The three triggers are a VOX, power cycling and a switch input. The VOX circuitry and algorithms are based on the superior VOX implementation of the FMR-2 radios. It is extremely sensitive and extremely good at rejecting noise. This results in no switching back to the radio during quiet audio passages.

Full protection against reverse battery and over power, the AUX-1 is nearly indestructible. Through cleaver design, the AUX-1 is compatible with 6V/12V positive/negative ground radios resulting in only one board being required for all installations.

As with all Aurora Design products, the VBx-1 is designed to SAE specifications and built in the USA at an ISO9001:2000 facility.

The HPC-1 offers a new level of performance in 6V vehicles. Until now, owners of vehicles with original 6/12V positive ground and 6V negative ground systems were extremely limited with their converted radios due to the anemic output of available power converters. With the HPC-1, owners can now fully drive two 4 ohm speakers, or four speakers at reduced power.

Fully filtered on all connections, and through the use of proprietary EMI reduction circuitry, the HPC-1 provides an extremely clean output without the need for large, power robbing external filters.

The HPC-1 features full reverse battery and transient protection. A low voltage lockout circuit ensures the converter always operates properly. No more blown fuses or damaged converters due to a weak battery!  Due to the clever design of the HPC-1, only a single board is required for all installations reducing inventory. Its extremely small size and low EMI output allow it to be mounted directly inside the converted radio simplifying installation and operation.

As with all Aurora Design products, the HPC-1 is designed to SAE specifications and built in the USA at an ISO9001:2000 facility.